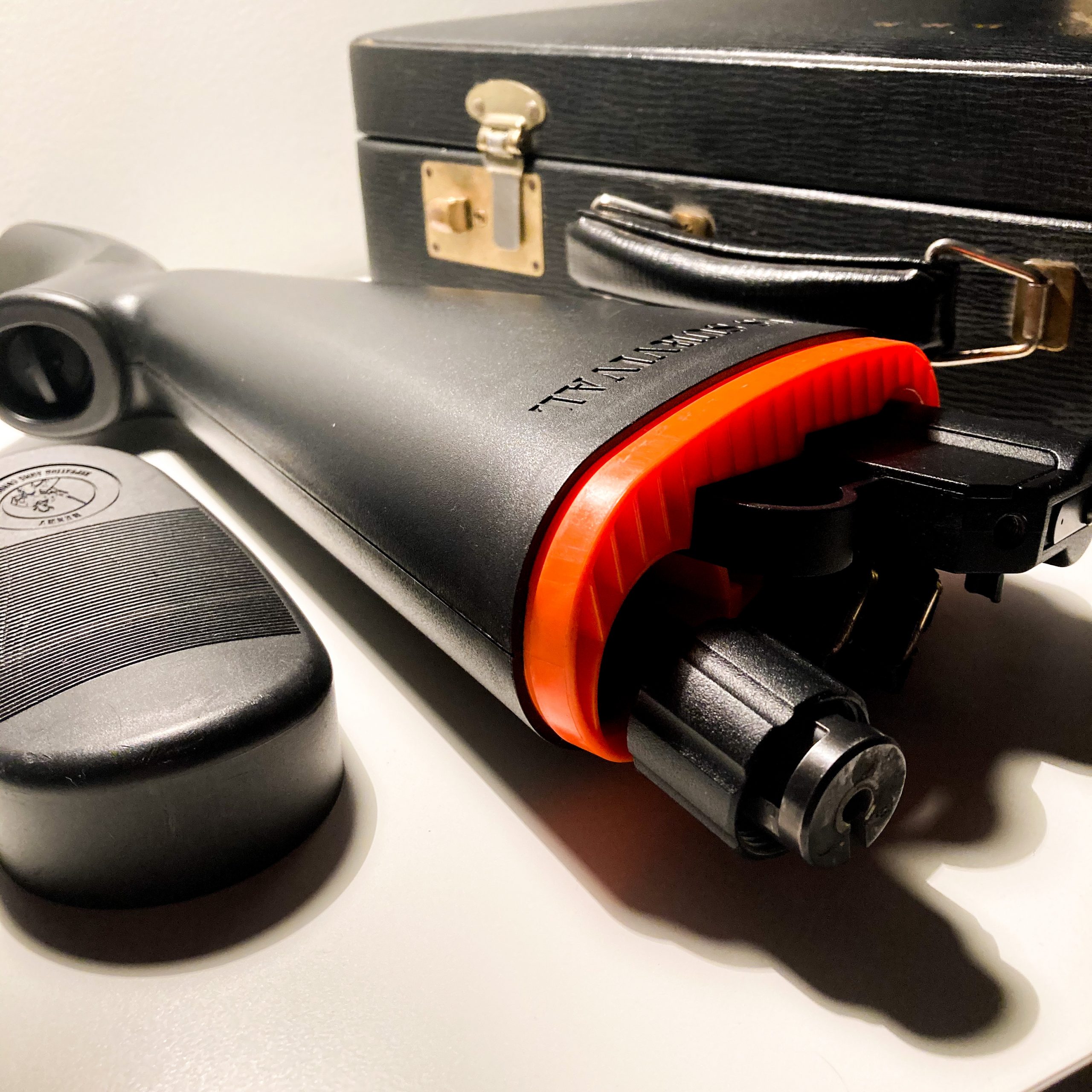 M: “Q Branch has put together a smart-looking piece of luggage. We’re issuing this to all double-0 personnel.”

007: “That’s a nasty little Christmas present. But I shouldn’t think I’ll need it on this assignment.”

–From Russia With Love

With these words we are introduced to the dynamic and intriguing Armalite AR-7. Based on the AR-5 utilized by the US Airforce to help downed pilots hunt for small game after being downed, the AR-7 is yet another iconic Eugene Stoner design (think the proper Q of the world of firearms!). Incidentally, because of this one’s inclusion in From Russia with Love, it was the first firearm I ever purchased, just days after turning 18.

Breaking Down the Take-Down Rifle 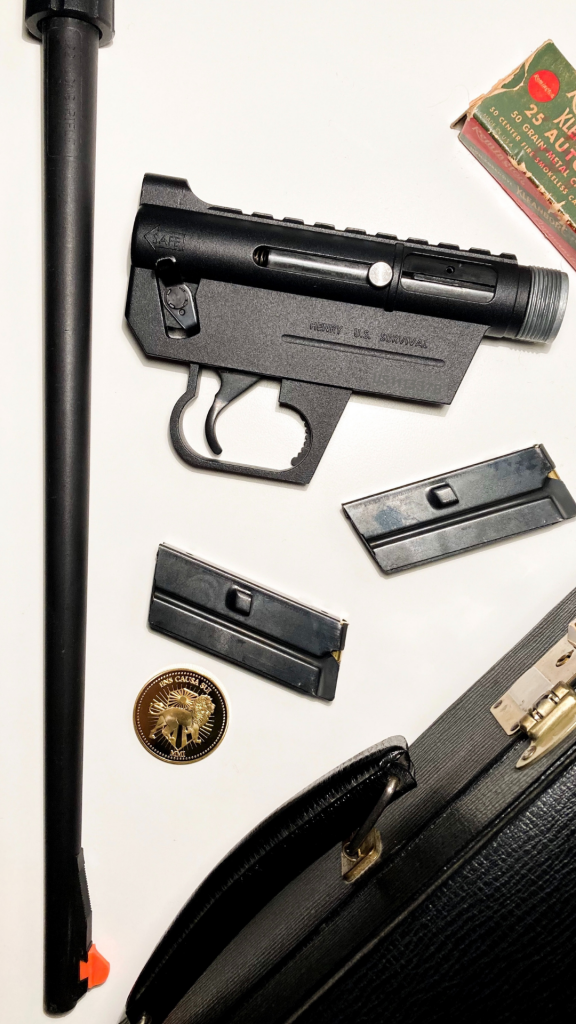 Although never chambered in .25 Auto (perhaps Q Branch modified the design) the AR-7 is a unique rifle that certainly fits 007. As mentioned above, this rifle is based on a previous design, the AR-5. The major difference between the two is that the AR-5 is a bolt action versus the AR-7 being semi-automatic. Weighing in at just 3.5 lbs, this rifle fits perfectly into an attaché, without weighing it down considerably. One can assemble and disassemble the rifle without any tools. In total, it is only 6 parts once broken down.

The barrel, receiver, and both magazines fit into their own dedicated compartments within the stock with ease. The polymer stock is foam filled as well, so not only is it light and easy to carry, it also floats! This is a carryover from the AR-5, to ensure that in the event of danger, capsizing etc, you wouldn’t lose your best hope at survival.

As mentioned by M, the gun is issued with an “infrared telescopic sight.” We never see how Bond carries this, or the suppressor he fits onto the end of the barrel later in the film. Q points to the barrel inside the stock when discussing the matter, something I’ve always considered a slip in the voice over.

Like the Beretta 418 or Walther PPK, this gun has those sort of lines and particular features that just stand out, and make them more than just another firearm. All of the controls are simple and compact. The magazine release is a lever built onto the front left-side of the trigger guard.  The charging handle pushes down into the receiver to help it better fit into the stock, and is easily drawn out to its full length to chamber a round once assembled.

As I mentioned earlier, on screen, the rifle is chambered in .25 ACP. While that could just be an intentional Q Branch modification–my guess is that it is a carry over from the Fleming text. In the novel, Bond is still carrying the Beretta 418, which is chambered in .25 ACP. 007 is still issued the attache case, and it has concealed rounds of .25, to feed his defensive handgun.

“Q Branch had put together this smart-looking little bag, ripping out the careful handiwork of Swaine and Adeney to pack fifty rounds of .25 ammunition, in two flat rows, between the leather and the lining of the spine. In each of the innocent sides there was a flat throwing knife, built by Wilkinsons, the sword makers, and the tops of the handles were concealed cleverly by the stitching at the corners. Q’s craftsmen had insisted on building a hidden compartment into the handle of the case, which, by pressure at a certain point, would deliver a cyanide death-pill into the palm of his hand. (Directly after he had taken delivery of the case, Bond had washed this pill down the lavatory.) More important was the thick tube of Palmolive shaving cream in the otherwise guileless spongebag. The whole top of this unscrewed to reveal the silencer for the Beretta, packed in cotton wool. In case hard cash was needed, the lid of the attache case contained fifty golden sovereigns.”

I am a massive fan of this case, and Fleming’s ingenuity. If you haven’t picked up the novels yet, do so, they really are phenomenal. But, going back to the question of the AR-7, I think this source material might be the reason we hear about a rifle in .25 auto. It is so Fleming, and straight from the text. While reading this, you can so easily picture that iconic scene with Desmond  Llewelyn and Sean, our first ever sequence with Q. That should be so telling here. The first few films strived so hard to bring the text to life, and truly following a lot of the source material verbatim. So, while some things in the briefcase change, the caliber of the ammunition kept within it stays the same, even though Bond is now carrying a Walther PPK.  All this is to say–whether it is a carry-over, a true homage, or an intentional modification, James Bond has a one of a kind rifle.

We first see the rifle, in its collapsed form, inside the attaché in the scene referenced above. It also happens to be the first ever scene to have Q on screen. This was one of my first Bond movies, and this scene, and the magic of the briefcase always caught my imagination. My brother and I once bought a burgundy briefcase at a yard sale with every intention in decking it out just like Bond. We never got that far (but more on my pursuit of that sort of case later!)

Unlike many of Bond’s later gear/gadgets issued by Q Branch, this rifle is allowed to be the star in a couple of scenes, which I really enjoy. After tracking Krilencu, the Bulgarian assassin down, Kerim Bay insists on shooting him rather than going into further personal debt with Bond.

The rifle appears again towards the end of the film, as Bond and Tatania flee SPECTRE with the Lecktor. While being pursued by a helicopter, Bond dives underneath a rocky outcrop and shoots a SPECTRE henchman at the perfect time, making him drop his grenade into the helicopter rather than on Bond.

MUCH later, in On Her Majesty’s Secret Service, James Bond keeps the AR-7 in the glove compartment of his Aston Martin, complete with scope and suppressor. We see it very briefly during the pre-title sequence as he uses the scope to watch Tracy walk slowly into the sea. I love this moment, as it immediately reminds the viewer that this the same Bond as before. So many of the early pieces of this movie are built around this reminder—Lazenby was the first to fill Connery’s shoes after all—and because of how fleeting it is, it’s my absolute favorite of them all. 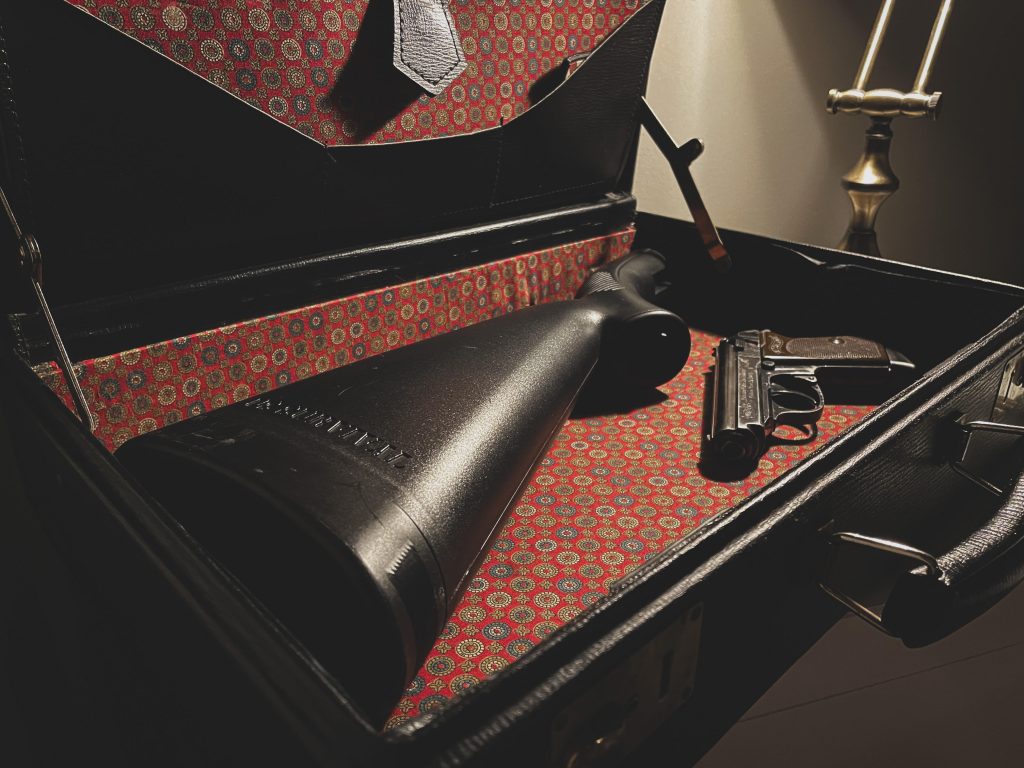 The AR-7 is a neat little rifle. Is it a sniper? Absolutely not. It’s chambered in .22LR, and meant for small game hunting at most. However, it has been a wonderful companion, despite its stiff trigger pull. One thing I have loved doing with it most has been introducing new shooters to the world of firearms with it. Having them watch me assemble the rifle while excitedly discussing its pop culture history and why I’m so excited to have it helps break the tension, the fear of the unknown. This is exactly what this channel is all about after all. Bridging the gap between the world of firearms and the pop culture legend that which is 007. The fact that its inexpensive to shoot and has little to no recoil is all the better for this purpose too! For the price, picking one of these up is definitely worth it.