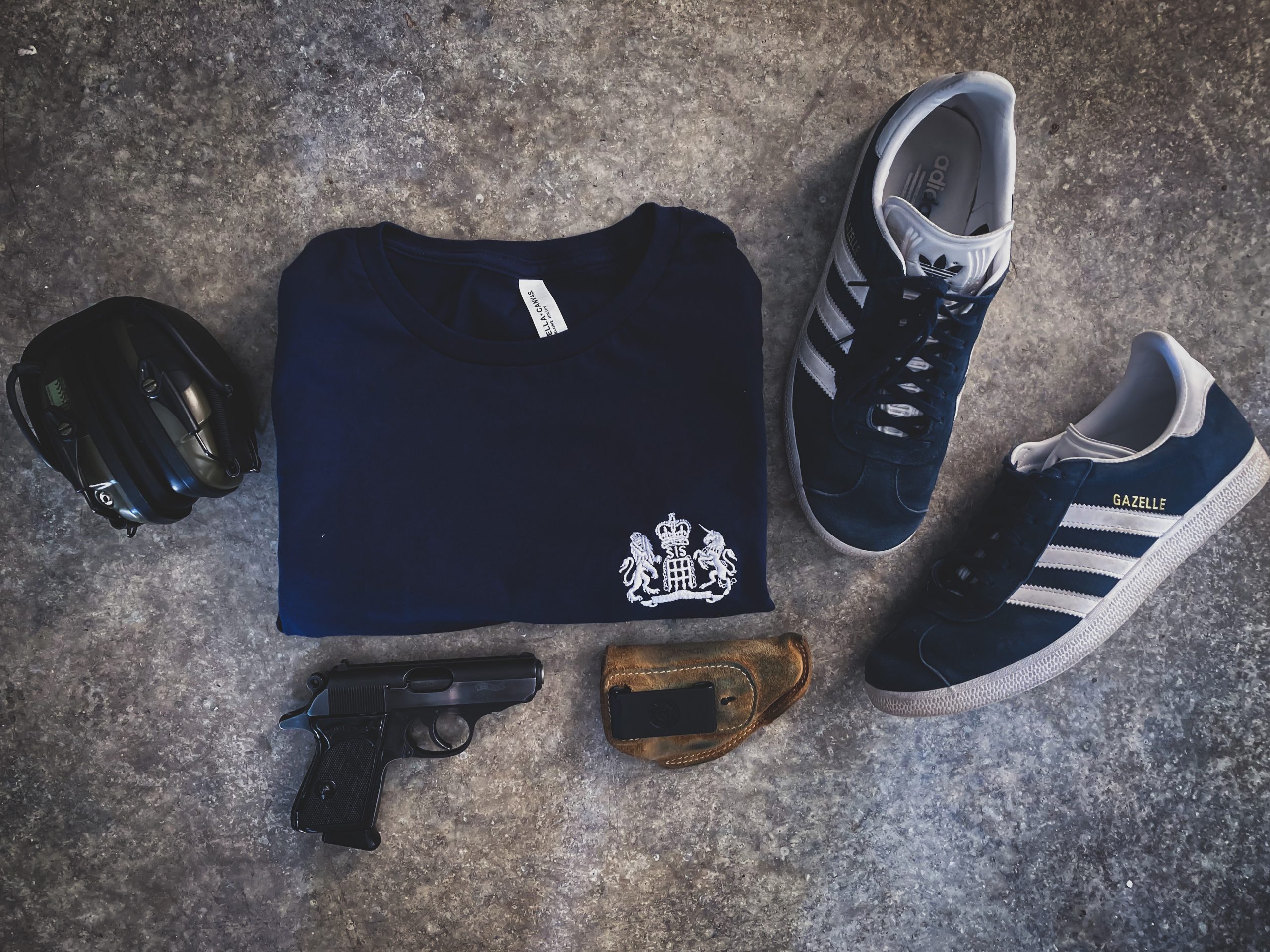 “The two thirty-eights roared simultaneously. The walls of the underground room took the crash of sound and batted it to and fro between them until there was silence.” –Moonraker.

My favorite Fleming novel opens with these beautiful lines, and a real glimpse into the training mentality of James Bond. In this post, we will dissect exactly how you can train like James Bond, employing both live fire and dry fire shooting techniques.

Poor lighting, dynamic targets and rapid movement highlight the thought process behind Bond’s live fire conditioning. The Fleming philosophy on training is one shared by many. Poor conditions help you practice for the worst case scenario. As he put it in Moonraker,

“M insisted that all shooting should be done in averagely bad conditions. A dim light and a target that shot back at you were as close as he could get to copying the real thing. ‘Shooting hell out of a piece of cardboard doesn’t prove anything’.”

I really do agree with this assessment from M. There’s definitely merits to shooting at a static target. Building fundamentals and determining accuracy with a new firearm rely on a fixed target, reasonably decent lighting and a neutral environment. I’ve introduced many a new shooter to the world of firearms using these conditions. When getting started, building a stable environment helps a shooter focus on the fundamentals they are working to learn. However, as one looks to hone their skills, adjusting these variables is critical. 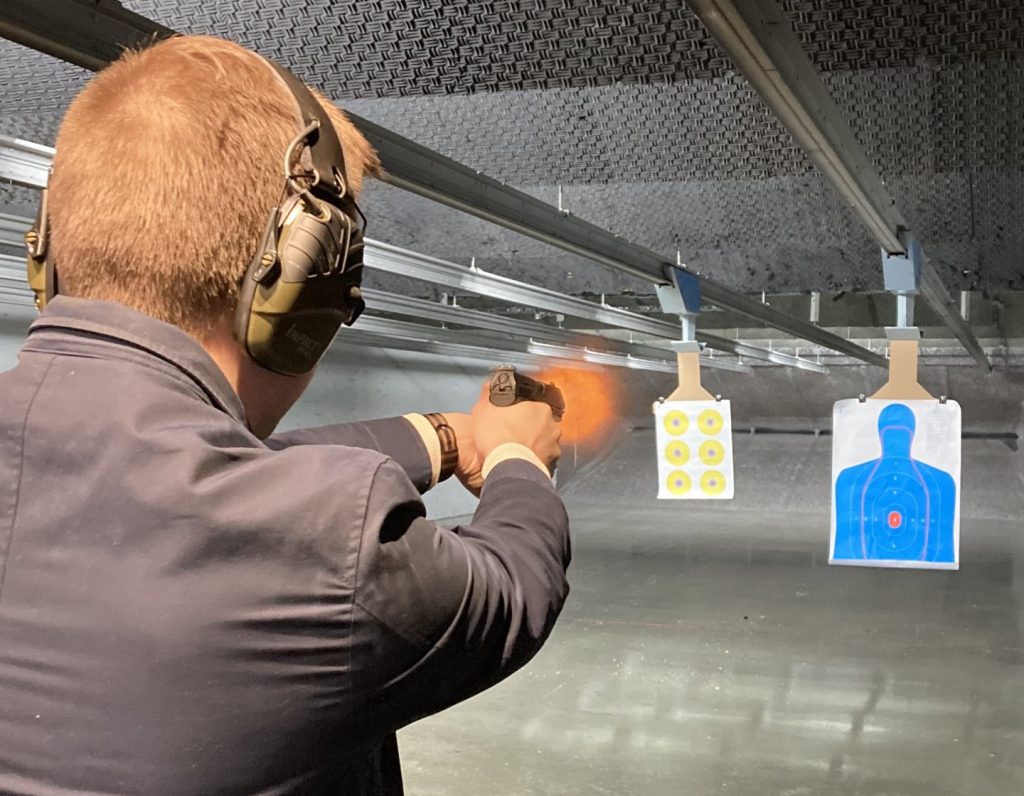 Personally, I enjoy low light shooting and the dynamic target carrier system we offer at Frontier Justice. Our programmable targets will move out, turn and face for a short period of time, move, and continue facing on their way to or from me. This limited opportunity to engage forces me to shoot clean and without hesitation, and quickly shows where my shortcomings are. The trick is working with my friends to have different programs each time. Shooting the hell out of the same course of fire over and over again can build complacency just as easy as a static target.

Other variables that can be added to these drills while shooting indoors are forced malfunctions and reloads. These are certainly tools employed by Bond. Being able to clear jams or malfunctions efficiently keeps you in the fight.

For the average shooter, who doesn’t have the MI6 training department at the ready, training with a friend can be helpful. If you have a friend load up your magazine, they can put an inert training rounds, or “snap cap” randomly into the magazine, forcing you to resolve the malfunction while the target continues to move. The same goes for reloads. If I am loading for a friend looking to improve reload time, I can at random limit the number of rounds I put in their magazine, to force a reload at unexpected times.

Training for the less than ideal is exactly what Fleming emphasizes in the first passage of Moonraker. Breathing that philosophy into your shooting and training is a great way to ensure you aren’t caught with your pants down when things don’t go perfectly, and to make sure you return Back in One Piece.

So while all of this is great, what happens when you’re James Bond, on the move, and unable to go to a live firing range? While undercover it would definitely give him away in an instant to be frequenting one. So, how does Bond keep his skills finely honed while abroad? Personally, I believe dry fire training is the answer. In fact, so did Fleming.

What is Dry Fire?

In the most basic of terms, dry fire is practicing with a firearm without the use of live ammunition. This can sound limiting at first, but the reality is that dry fire is a great way to build muscle memory, practice skills, and to keep sharp when ammo is unavailable (like the last year and a half).

Dry fire can be more helpful than live fire, even during times of plenty. When done right and safely, dry fire can help build fundamental skills that can’t be practiced on most ranges. From draw drills to trigger pull and sight movement, dry firing is a great way to keep things sharp and find failure points that may be more difficult to locate while live firing.

Before I go any further, I want to emphasize this point: dry fire should not be done anywhere near live ammo. Period. Empty your mags in another room, into a bag, and check, check and check again before starting. We always assume that a firearm is loaded, and create the safest conditions possible before performing any dry fire. I like using snap caps because they are clearly not live rounds. They easily take the place of live rounds in the magazine, and allow me to drill safely. But again, check constantly to confirm your firearm is safe to keep everyone around you in one piece.

Why Dry Fire is Perfect for an Agent on the Move

“He opened a drawer and took out a light chamois leather holster and slipped it over his left shoulder so that it hung about three inches below his armpit. He then took from under his shirts in another drawer a very flat .25 Beretta automatic with a skeleton grip, extracted the clip and the single round in the barrel and whipped the action to and fro several times, finally pulling the trigger on the empty chamber. He charged the weapon again, loaded it, put up the safety catch, and dropped it into the shallow pocket of the shoulder holster.” -Casino Royale

While this example is more of a function check, it illustrates at the most basic level how Bond can do dry fire training anywhere. His base of operations, the hotel room, can be his workout facility and shooting mechanics range all at once. Bond can use the bed to catch his falling magazines as he works on his reload speed or use the doorknob as a focus point as he practices pulling the trigger repeatedly. While no projectile is fired during dry fire, you can clearly see if you are dragging the sight picture out of alignment with poor or inconsistent trigger finger placement or pressure. Focusing on any number of items in a room can be a great way to see how well the sights stay aligned throughout the entire process.

I personally find I benefit from dry fire the most in front of a large mirror, which no hotel without, so I can see my stance, trigger pressure and movements from a different angle. Incidentally, your reflection also makes a great target to sight down on while practicing. We see Bond do this very thing in On Her Majesty’s Secret Service as he prepares for the raid on Piz Gloria:

“He spent the next morning in his room, changed into ski-clothes and sent out for a pair of snow-goggles and thin leather gloves, sufficient to give some protection to his hands but close-fitting enough for the handling of his gun. He took the magazine out of his gun, pumped out the single round in the chamber and practised shooting himself in the wardrobe mirror with the gloves on until he was satisfied.” -On Her Majesty’s Secret Service

Adjusting to your Environment

All of the above is true for draw drills and training as well. Bond’s globetrotting means all sorts of wardrobe changes, and new ways of concealing his Walther PPK or P99 to fit his attire.

For instance, in Spectre, Bond goes from a three piece suit and shoulder holster while in Rome to a linen jacket and 4 o’clock inside the waistband carry in the matter of days. To stay alive, and to make sure his draw is still comfortable, Bond likely would practice drawing his handgun inside his hotel room prior to leaving.

The other day, I had the pleasure of working with Eisuke (@inspiredbybond on Instagram) on this very topic for an article he was writing on From Tailors With Love. In our conversation about Bond coming back to a double breasted blazer for the first time in many years, I referenced how this unique garment would require Bond to drill with dry fire, as he does in the above passages to make sure he could still comfortably access his handgun. Dry fire is a fantastic way to find shortcomings in your wardrobe and daily carry. 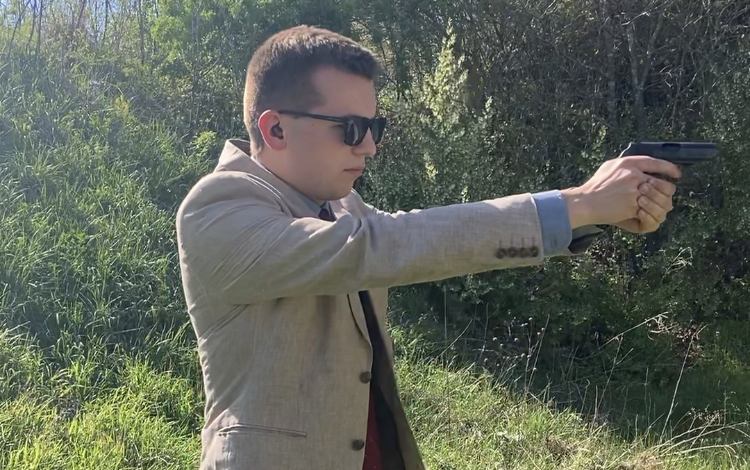 As Bond fans, we live for bringing 007 into our daily lives. Training like James Bond means working hard to become our very best in whatever we are doing. Everything listed above about are all things we can bring into our daily life and training too. Carrying like Bond means we should train like him as well. Dry fire is all about building muscle memory. Like working out, or any other skill, you will only improve yourself overtime by adding it into your daily regiment. Decide how you want to train like Bond, blend it into your daily life, and become better because of it.

Caleb Daniels is a lifelong Bond fan and firearms enthusiast from Kansas City, Missouri. For the past six years, he has worked in the firearms industry, and continues to do so. Commando Bond was founded in 2020 as a passion project to bridge the gap between pop culture and the world of firearms, by analyzing how to live like Bond, from his daily carry, to his wardrobe and lifestyle.