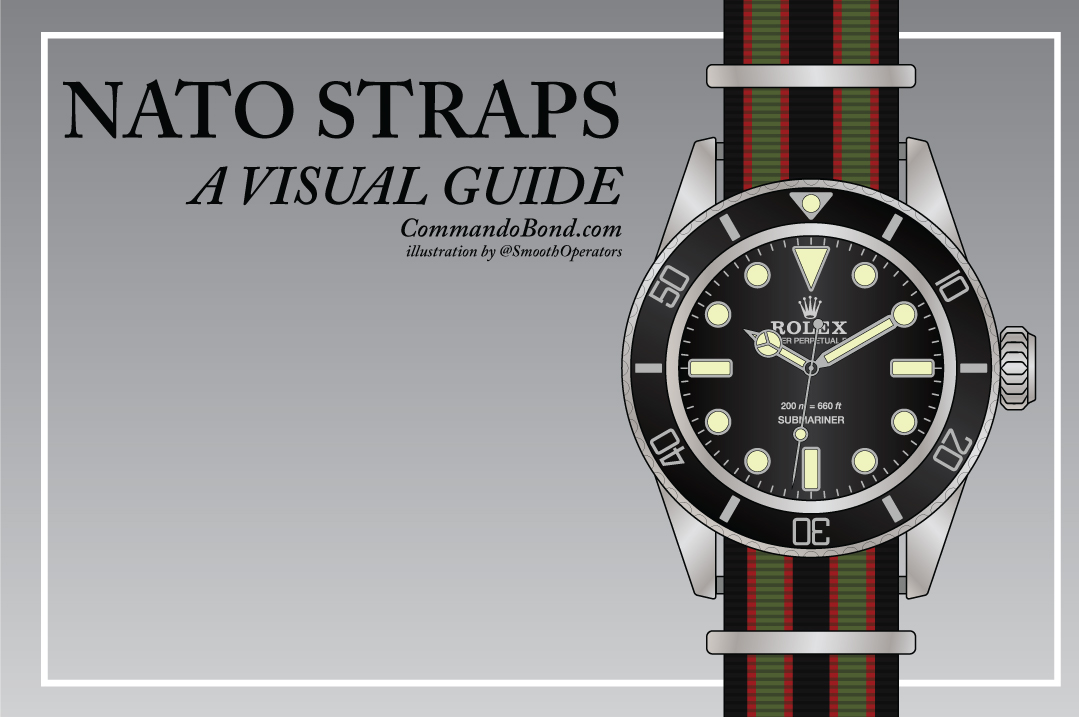 Timepiece wrist straps had been inextricably linked to military service long before Sir Sean Connery famously illuminated the face of his Rolex Submariner with the glow of his lighter in 1964. But to understand why the iconic Black, green, and red striped band seen on Bond’s wrist in Goldfinger is not in fact a “NATO” strap, (and why it shouldn’t matter), we must travel all the way back to the blood, mud, and sweat soaked trenches of eastern France in 1914.

At that time, pocket watches on the battlefield had risen in popularity, and although straps and ‘wristlets’ were not necessarily unheard of, they were far from ‘standard’. The dire need for a wrist-worn timepiece became apparent as officers signaling orders found themselves juggling between trench whistle, sidearm, and watch. Hastily soldering lugs to their pocket watches, and crafting crude leather or canvas straps, officers were better able to effectively coordinate attacks and movements while keeping their hands free. As with most solutions created in the chaos of war, however unpolished, this too would effectively change history and more specifically how timepieces were worn.

It didn’t take long for this practice to gain widespread popularity, and before the end of the war, American Doughboys would be sent to the front lines with the first issued wristwatches. While the design, sturdiness, and intricacy of timepieces designed for military service would be improved over the next half century, little attention was paid to the strap itself.

The Birth of the G10 Strap

In 1973, however, the British Ministry of Defence Standard (DefStan) 66-15 featured, for the first time, a simple, gray, nylon strap identified only as, “Strap, Wrist Watch”. A soldier need only fill out his Form G1098 or “G10” for short and pick up his new strap at the unit’s supply store of the same name. And thus, the “G10 Strap” was born.

The G10 strap proved genius in its simplicity, the double-segmented design with one loop securing to the other acts as a failsafe ensuring even if broken or torn, the wearer retain the watch itself. British soldiers, ever proud, (and rightfully so), bored of the simple ‘Admiralty Gray’ band, and began wearing custom, personally purchased striped straps in their regimental colors as a nod to their lineage. These simple designs offered an opportunity for esprit de corps – and the rest is, as they say; history.

Since that time, the G10 strap itself has seen little change, (except in its width and hardware). In its official form, it has since become available through the NATO Stock Number system, to which we can owe its now more popular name; the “NATO strap”.

But you may be thinking, if the G10 made its debut in 1973, how is it possible Commander Bond was sporting a regimental G10 band underneath his white tux nearly 10 years beforehand? The answer is actually quite simple; he wasn’t wearing a G10 at all. Infinitely fashionable, (and way ahead of his time), James Bond was wearing just a simple, striped, one-piece construction, nylon band – independent of the history we discussed. His famous big crown Rolex Submariner came with a standard jubilee band, and it is said that a replacement band was needed for Sir Sean Connery to be able to secure the watch over his thick wetsuit. A member of the production crew offered the strap off his personal watch as a solution; an act that would solidify what we now call the “Bond NATO” as a stylistic icon today.

These days, nylon straps similar to the G10 and its regimental offspring, are seen affixed to everything from G-shocks and Suuntos to Rolexes and Patek Phillipes. Manufacturers such as Omega have leaned in on that popularity, offering multiple models standard with G10 style straps. Given Daniel Craig’s many homages to an earlier Bond it’s unsurprising to see him outfitted on screen, once again, with an updated G10 Regimental strap in Spectre. Is it purely coincidence that British soldiers would choose to modify issued watch straps so similarly a full decade after Goldfinger? Perhaps not; James Bond as both a man and an idea has had an effect on everything from style to technological advancement for the past half century, and at times it’s unclear whether art imitates life, or the other way around.

It’s unclear whether this trend will be lasting one, or if we are experiencing only a resurgence in its popularity. With literally thousands of color combinations and patterns available, choosing a band can be daunting, but as with all sartorial conundrums, you can never go wrong with a classic. As such, I’ve put together a short guide to both original and new styles that will look great now and should stand the test of time. Remember that this is only guide to help educate you on the history of these bands, and not hard and fast rules. The beauty of the ‘NATO’ strap is in its casual simplicity – so remember not to take them too seriously!

Written and Illustrated by @SmoothOperators

I want to thank @SmoothOperators for his fantastic input into NATO straps and their history! His illustrations are phenomenal, I strongly encourage you to give him a follow on Instagram to see more of his work! – Caleb